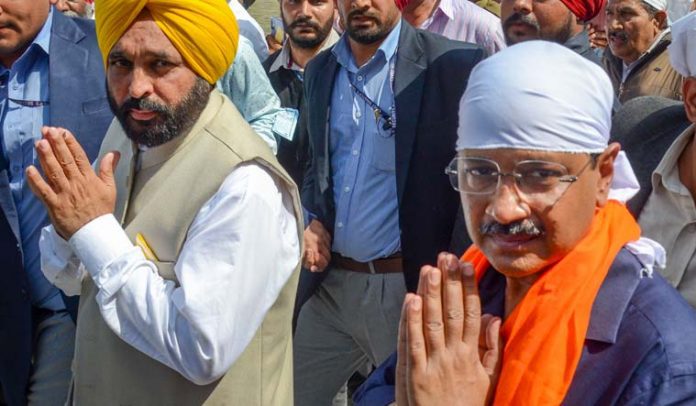 Ahead of the AAP’s roadshow to celebrate its stupendous win in the Punjab polls, party national convener Arvind Kejriwal along with Chief Minister-designate Bhagwant Mann on Sunday paid obeisance at the Golden temple here. Soon after reaching here, Kejriwal headed straight to the Golden temple to offer prayers.

Earlier, the Delhi Chief Minister, who was accompanied by his Deputy, Manish Sisodia, was received by Mann at the airport. Senior leader Raghav Chadha was also present. Kejriwal and Mann will also pay obeisance at the Durgiana Mandir and the Sri Ram Tirath Mandir here.

They will later take part in a roadshow in Amritsar to celebrate the party’s landslide victory and thank voters. The oath taking ceremony will be held on March 16 at Khatkar Kalan, the ancestral village of legendary freedom fighter Bhagat Singh, in Nawanshahr district where Mann will be sworn in as the new chief minister.