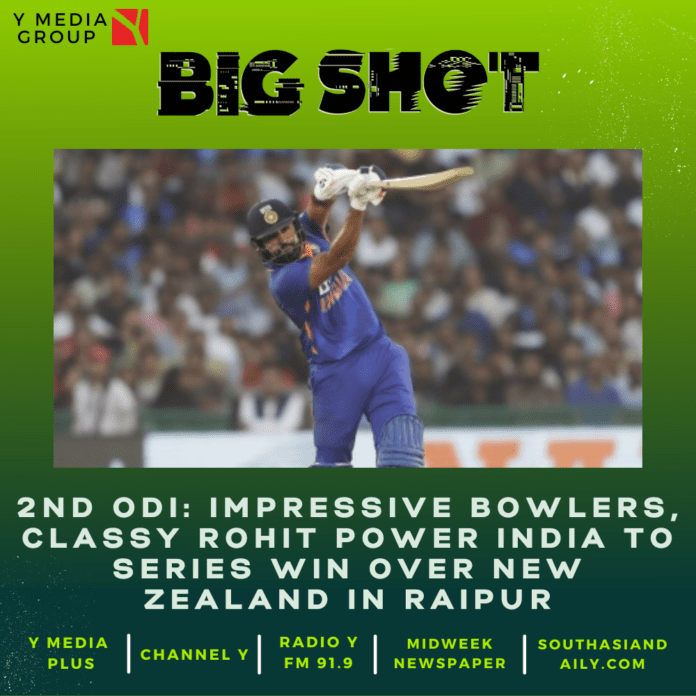 An impressive outing by bowlers followed by an eye-catching fifty by captain Rohit Sharma powered India to series win against New Zealand with a clinical eight-wicket win in the second ODI at the Shaheed Veer Narayan Singh International Stadium, here on Saturday.

Indian bowlers, led by Mohammed Shami, were accurate in their bowling, fetched good swing, turn, bounce, and took sharp return catches in an impressive show to bowl out New Zealand for just 108. Rohit then smashed 51 off 50 balls and led the way for the total to be chased down in 20.1 overs with India having eight wickets in hand.

After win in the first ODI in Hyderabad, the dominant victory in Raipur’s debut as an international venue meant that India took an unassailable 2-0 lead in the three-match series, which is also their second ODI series victory of the year at home.

On a pitch with some grass cover, Shami and Mohammed Siraj found seam movement to run through the New Zealand top and middle order, reducing them to 15/5 at one stage.

Though Glenn Phillips, Michael Bracewell and Mitchell Santner played some defiant knocks, they were unable to bail their side out of trouble and the pressure maintained by Hardik Pandya, Shardul Thakur, Washington Sundar and Kuldeep Yadav.

Rohit’s decision to bowl first brought reward immediately as Shami got one to nip back in and go past Finn Allen’s flick to crash into the stumps on the fifth ball of the innings. Shami and Siraj were on the money for the next five overs, making life difficult for the visitors’ batters.

The pressure eventually caused Henry Nicholls to edge to first slip off Siraj in the sixth over. Four balls later, Daryl Mitchell chipped the ball back to Shami, who took a one-handed stunning return catch.

Devon Conway got New Zealand’s first boundary with a crisp drive in the gap between cover and point. But in a bid to drive off Hardik, Conway could only see the bowler take a one-handed low catch by taking out his left hand on the follow-through in the ninth over.

Captain Tom Latham pushed at a seaming away delivery from Thakur without footwork in the 11th over, giving a straightforward catch to first slip, leaving New Zealand at 15/5. Phillips and Bracewell struck six delightful boundaries, especially with the latter cutting, punching and whipping off Shami for three fours.

But Shami had the last laugh, bouncing out Bracewell and feather edge grabbed by the keeper in the 19th over. Santner had luck on his side when Rohit dropped his catch at short mid-wicket in the 20th over and four overs later, Kuldeep shelled a catch off his own bowling.

With the ball getting older, Phillips was quick to drive and pull off Thakur while Santner pulled and lofted Kuldeep with ease. The 47-run partnership was ended by Hardik on the first ball of 31st over, with his slower delivery taking the inside edge of Santner’s bat and crashing into the stumps.

In the next over, Phillips departed by pulling straight to deep mid-wicket off Washington. He and Kuldeep took out Lockie Ferguson and Blair Tickner in successive overs to wrap New Zealand’s innings in 34.2 overs.

In defence of a paltry total, New Zealand bowlers, barring Ferguson, were unable to extract the same amount of movement which the Indian bowlers were able to do in the first ten overs. That allowed Rohit and Gill to tee off with ease.

While Rohit pulled and slashed off Henry Shipley’s short balls with ease, Gill started off with an uppish square drive over backward point off the same bowler for making three boundaries of the first four overs.

Rohit hit the first six of the match by hooking off Ferguson’s pace over fine leg with immaculate ease. When he overpitched, Gill was quick in leaning into the drive through cover for four more.

Rohit played some breathtaking shots in power-play � a short ball from Tickner was pulled in a flash over mid-wicket for four, before he went inside-out effortlessly over extra cover for a majestic six.

He welcomed Santner in the 13th over with a hard sweep through square leg, before Gill took another boundary off him through the outside edge running wide of slip. Two overs after getting his fifty, Rohit tried to work a short of length ball from Shipley through leg-side. But the ball stayed low to hit Rohit on the knee roll, trapping him lbw for 51.

Virat Kohli dished out a lovely straight drive, presenting the full face of the bat for a delightful boundary off Shipley, before pulling fiercely through backward square leg to make it two fours in the 17th over.

Gill welcomed Bracewell with pull and sweep over mid-wicket fence for two boundaries in the 18th over to take India closer to victory. Though Kohli was stumped off Santner for 11, Ishan Kishan hit two boundaries off spinners before Gill hit the winning runs by dancing down the pitch and lofting over mid-on off Santner to seal a crushing victory for India.