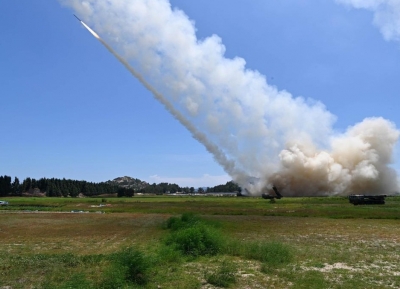 Chinese forces took part in drills focused on land attacks and long-range airstrikes around Taiwan on Sunday, its military said, on what was expected to be the final day of extensive exercises rolled out in response to a visit to the island by US House Speaker Nancy Pelosi.

The Eastern Theatre Command of the Chinese military said around noon local time that it conducted live-fire drills in the waters and airspace around Taiwan “as planned”, CNN reported.

“The drills focused on joint fire land strikes and long-range air strike capabilities,” the command said in a statement posted to its official account on the social media platform Weibo, without specifying whether the drills have ended.

The exercises, planned to take place in six zones around the island, began on Thursday and were scheduled to last until Sunday at noon local time in Beijing, Chinese state media reported.

Taiwan’s Defence Ministry on Sunday said it detected multiple Chinese aircraft, naval vessels and drones operating around the Taiwan Strait, in what it called a “simulated attack against the main island of Taiwan and Taiwan’s naval vessels”, a slight dial-up of language from Saturday when it said that Chinese military drills around the island could be a ‘possible simulated attack’, reports CNN.

Taiwan’s military “closely monitored” the situation and deployed aircraft and vessels to “appropriately” react to Chinese military drills around the island, the Ministry added.

The Ministry did not immediately provide an exact number for the Chinese aircraft, vessels or drones that were detected on Sunday morning or say whether they crossed the sensitive median line in the Taiwan Strait that separates the island from the Chinese mainland.