Donald Trump little fazed by Biden’s Philadelphia speech, renews his call for reinstalling him as President 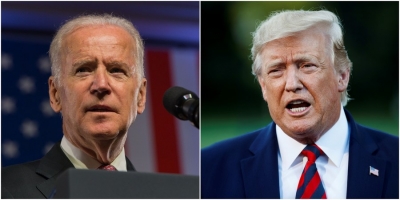 Former President Donald Trump was little fazed by Biden’s powerful rhetoric at Philadelphia that called on MAGA republicans led by Trump as a “threat to the foundations of democracy” and has renewed his appeals for reinstalling him (Trump) as President.

Trump’s remarks, however ridiculous it might sound, seems to be gaining much traction with a section of the Make America Great Again (MAGA) Republicans who are seething with rage over the 15 per cent taxes imposed on corporates and the rich having to subsidise the high costs of health care to the middle class through the inflation reduction act of Biden and the massive student loan waiver program of the democrats.

Even as certain critics of President Joe Biden mocked him for the Philadelphia speech (They usually do when he appears to fumble for words or forgets a name) they were actually quite rattled by the strong tenor of the Biden speech. On September 1, the president delivered a speech with a clear message that infuriated his detractors.

Speaking before a crowd gathered at Philadelphia’s Independence National Historical Park ( (where America’s political forefathers such as Thomas Jefferson, Washington and others used to congregate for drafting the constitution), he addressed “the continued battle for the soul of our nation.”

Biden took direct hit at what he considered the primary opponent in that battle: “Donald Trump and the MAGA Republicans represent an extremism that threatens the very foundations of our republic.”

Surprisingly in a sudden change of tone Saturday, as if to placate some of the republicans who don’t side with Trump, Biden said while the MAGA faction doesn’t represent all Republicans, the ones who do support the former president are promoting a dangerous ideology.

In addition to pushing through legal decisions such as the overturning of Roe v. Wade, he added that MAGA Republicans “fan the flames of political violence that are a threat to our personal rights, to the pursuit of justice, to the rule of law, to the very soul of this country”.

The speech specified the death threats against the FBI agents who conducted the search of Mar-a-Lago and the glorification of the insurrectionists who stormed the U.S. Capitol building. Trump had stated that he would pardon all those who participated in the January 6 Capitol Hill’s insurrection if he became president again, criticised much by the liberals as being absurd.

Biden’s Philadelphia address was blasted by the right wingers as being divisive and hateful. Donald Trump himself wrote on Truth Social (via New York Post) that the president “must be insane, or suffering from late-stage dementia.” Perhaps taking the “divisive” criticism to heart, Biden tried to soften his message the next day.

President Biden was pressed to clarify his controversial words on September 2, when a reporter asked him whether he thought Donald Trump’s supporters posed a real threat to America. Per the New York Post, the president explained that he hadn’t meant the MAGA faction was a physical threat, but added, “I do think anyone who calls for the use of violence, fails to condemn violence when it is used, refuses to acknowledge when an election has been won, insists upon changing the way in which they can count votes, that is a threat to democracy.”

Biden’s softening of the Philadelphia speech against the MAGA was carried by most American newspapers Saturday.

Biden went on to acknowledge that the people who voted for Trump were voting for his “philosophy”, not for the events that occurred after the election. Still, he repeated his belief that the “failure to recognise and condemn” political violence and election-result deniers is “inappropriate.” This time, he didn’t specifically mention Trump’s refusal on January 6 to admit he lost the election, but the implication was there.

The explanation seems unlikely to change anyone’s opinion. Pete Hegseth of Fox News scoffed, “We don’t think Joe Biden had a change of heart. What Joe Biden said last night is exactly what the Democratic Party thinks of us … They have turned the patriotic opposition into treasonous outlaws even if they try to deny it the next day because we stand for freedom, and that’s the problem?”

Previous article‘Bloody Revolution Or Elections Only Way To Remove Ruling Elite’: Pakistan Former PM Imran Khan
Next articleExperts on the effects of rising prices and inflation in the food business