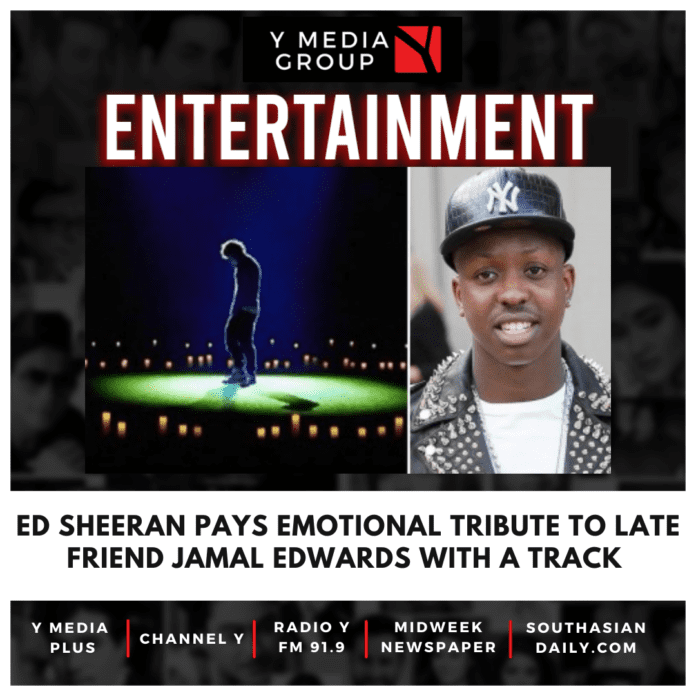 Shape of You’ hitmaker Ed Sheeran has delivered an emotional tribute to his late friend Jamal Edwards in a beautiful track.

The music video opens with a shaky camera pointing at Sheeran, 31, who is lit up by two spotlights and standing in a circle of lit candles, reports ‘Mirror.co.uk’.

Wearing a blue jumper and jeans, the music icon begins to rap: “Yo Jam, this is a letter to you, it’s been a while but it’s been hard for me to get in the booth. Since we last spoke I’ve become a father of two trying to live life with a smile but that’s been harder to do. Because all I want to do is talk about you, but these tears won’t let me talk about you. We should have known that we’d be lost without you.”

As per ‘Mirror.co.uk’, DJ and music entrepreneur Edwards, who was made an MBE (Member of the Most Excellent Order of the British Empire) for his services to music in 2014, died on February 20 last year at the age of 31.

Shortly after Jamal’s death, Sheeran shared an Instagram post of the younger-looking pair with the caption: “I haven’t posted anything because I can’t find the words, I can’t reply because I don’t know what to say. Jamal is my brother. His light shone so bright. He only used it to illuminate others and never asked for anything in return.”

“A star’s light shines for millions of years after they go, and his will continue to light up every dark moment, we are all witnessing his power. I would not be here without him, professionally and personally. There will never be anything close to what he is, but I’m so grateful to have existed within his orbit. My brother, come on.”

It comes as Jamal’s grieving mum, Loose Women star Brenda Edwards praised Ed for spending days on end comforting her family after Jamal’s tragic death. Speaking on ‘Good Morning Britain’ as the anniversary of her son’s death approaches, 53-year-old Edwards spoke about Sheeran’s song, which he has dedicated to Jamal.

Previous articleJennifer Lopez Was Reluctant To Star In ‘Shotgun Wedding’
Next articleY Media ‘The BIG Shot’: Date with Sports