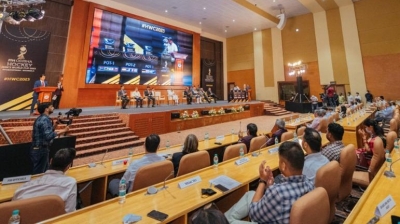 Host India have been placed in Pool D along with old nemesis England and an upcoming Spain for the FIH Senior Men’s Hockey World Cup to be held in Odisha in January 2022.

The FIH Odisha Hockey Men’s World Cup will be in Bhubaneswar and Rourkela from January 13-29, 2023. Wales is the fourth team in Pool D. Tokyo Olympic bronze medallist India and England have been engaged in many exciting battles in recent times, the latest of which was fought at the Birmingham 2022 Commonwealth Games — a 4-4 draw in which the hosts scored twice in the last few minutes of the match.

India and Spain, who fought for gold in the 1980 Moscow Olympic Games in which India emerged the winner, have also played some exciting matches. The Spanish team is bouncing back in the rankings after going through a slump. With Wales, another exciting team from Europe, Pool D promises to produce some eye-catching action.

Pool A comprises Australia, Argentina, France and South Africa; Pool B has reigning World and Olympic champions Belgium, European powerhouse Germany, South Korea, and Asian Games winner Japan while Pool C will see World No 3 The Netherlands battle it out with New Zealand, Malaysia and Chile.

The Pool to watch is Pool B involving Belgium, Germany, Korea and Japan. Though on paper Belgium and Germany look favourite to qualify for quarterfinals as the top two teams from this pool, Korea and Japan could throw a spanner or two in the works and cause upsets.

Pool C looks the easiest of them all with the Netherlands having to contend with New Zealand besides minnows Malaysia and Chile.

Going by their rankings and recent form, Australia and Argentina from Pool a, Belgium and Germany (Pool B), Netherlands and New Zealand from Pool C, and India and England from Pool D should qualify for the quarterfinals.

But the World Cup is known to throw some surprises and the upcoming edition is unlikely to disappoint the fans as many of the teams are still recovering from the pandemic and have not played enough matches in the last couple of years.

This is the second successive World Cup being hosted by Odisha, which held the event in 2018 at the Kalinga Stadium in Bhubaneswar. Overall, this is the fourth World Cup to be held in India after the 1982 edition in Mumbai and the 2010 one in New Delhi.

The draw was conducted by FIH CEO Theirry Weil at Bhubaneswar on Thursday in the presence of Odisha Chief Minister Navin Patnaik, the state’s Youth Affairs and Sports Minister Tusharkanti Behera and Hockey India Committee of Administrators (CoA) members Zafar Iqbal and S. Y. Quraishi and other dignitaries.

Attending the draw ceremony, Odisha Chief Minister Naveen Patnaik said, “We are always very proud to welcome the best hockey teams and players of the world for such an outstanding event. This time, the appetite is even bigger since, on top of our magnificent Kalinga Stadium in Bhubaneswar – where so many wonderful sports stories have already been written – we are inviting the world to a brand-new arena, namely the Birsa Munda Hockey Stadium in Rourkela.”

The new stadium is a further testimony of our strong commitment towards hockey, he said.
FIH acting president Seif Ahmed said, “We can’t wait to see the best teams in the world in action in the new “jewel” of hockey, the Birsa Munda Hockey Stadium in Rourkela, which, alongside the iconic Kalinga Hockey Stadium in Bhubaneswar, will play host to the World Cup.”

He thanked Hockey India and Odisha for hosting the 15th edition of this World Cup. “With their commitment, experience and passion, you can expect nothing else but an amazing event coming our way in 4 months time!,” said the acting president.

The detailed match schedule will be released in the next few days.

Previous articleHalf Of Canadians Either Can’t Find A Doctor Or Can’t Get A Timely Appointment With The One They Have: Survey
Next articleY Media Exclusive: Toronto International Film Festival Kicks Off Today