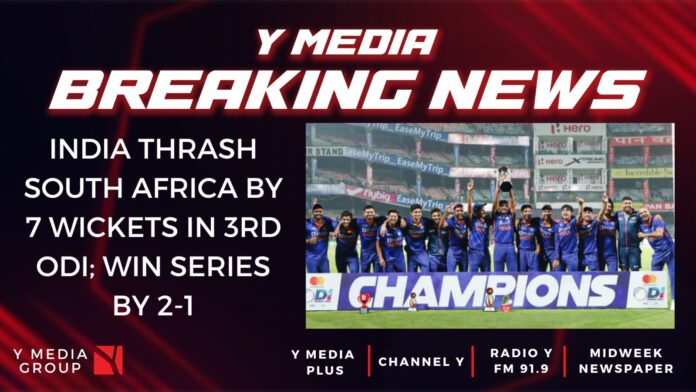 Spinners Kuldeep Yadav, Shahbaz Ahmed and Washington Sundar shared eight wickets between themselves to bowl out South Africa for just 99 and set the base for India’s comprehensive seven-wicket victory in the ODI series decider at the Arun Jaitley Stadium here on Tuesday.

Captain Shikhar Dhawan’s decision to bowl first after 30 minutes of delay caused by a wet outfield was justified by Kuldeep (4-18), Shahbaz (2-32) and Washington (2-15) spinning a vicious web on a pitch which had moisture and made batting difficult.

The spin troika, along with Mohammed Siraj’s 2-17, completely outplayed South Africa to bowl them out for just 99 in 27.1 overs, which is their lowest ODI score against India. It is also the lowest ODI score recorded at this venue as the visitors’ lost their last six wickets for 33 runs.

Shubman Gill (49) and Shreyas Iyer (28 not out) then made short work of a paltry chase of 100 to give India their fifth successive ODI series win this year by completing the chase in 19.1 overs.

India’s move to open the bowling with Washington turned out to be successful in the third over when Quinton de Kock cut hard and gave a simple catch to the short third man.

Janneman Malan got going with a creamy cover drive for four off Siraj. In his next over, Malan danced down the pitch by nailing the pull on a harmless short ball through square leg for another four. He increased the level of his glorious shots by leaning into the drive through extra cover off Siraj his third four of the day.

But on the very next ball, Malan tried to pull another quick short ball by Siraj from off-stump, but top-edged to deep square-leg. A struggling Reeza Hendricks tried to fend off a bouncer from Siraj, but was caught by short third man on the second attempt, with South Africa at 26/3 at the end of the power-play.

Post power-play, India’s bowlers kept a tight leash on South Africa’s batters, resulting in Aiden Markram being drawn forward to drive a flighted ball from Shahbaz. But the ball dipped and Markram could only send a thin edge behind to the keeper.

More trouble came for South Africa as stand-in captain David Miller was bowled through the gate by a quicker delivery from Washington coming from around the wicket in the 19th over. In the next over, Kuldeep cramped Andile Phehlukwayo for room with his googly turning in and took the inner edge to hit the stumps.

Heinrich Klaasen was waging a lone battle for South Africa, starting by scooping Shahbaz over fine leg and pulling on backfoot through mid-wicket for a brace of fours. Klaasen was then quick to cut Washington through cover for four more.

After cutting Shahbaz past backward point for his fourth boundary, Klaasen tried to create room for another cut. But the left-arm spinner got the ball to grip, bounce and turn a little to crash into the stumps.

In the chase, Gill switched on his attacking mode by pulling over ‘keeper for four in the opening over. In the next over, Shikhar Dhawan got off the mark with a creamy drive through extra cover for four off Ngidi. After cutting Jansen past the slip cordon, Gill then wowed the fans with a well-timed on-drive off Ngidi, beating mid-on to pick another four.

When Jansen dropped short, Gill punched easily past cover before bringing out the short-arm jab through mid-wicket with panache to collect a brace of fours. Gill’s timing continued to be top-notch when he superbly placed the pull off Nortje wide of mid-wicket for four.

But a mix-up on the first ball of the seventh over saw Dhawan being run-out for eight. Ishan Kishan brought out ferocious fours through point and square leg, before Fortuin got one to turn in and take a thin edge behind to keeper.

Iyer joined the boundary-hitting party by smashing Fortuin for a brace of powerful fours hit straight down the ground. Gill hit two more fours, including a crunchy drive through the gap at extra cover, while Iyer ramped wide of keeper to collect another four and put India on the verge of series win.

Though Gill was trapped lbw by Ngidi, Iyer finished off the chase in style with a six slammed down the ground to clinch a series win for India.