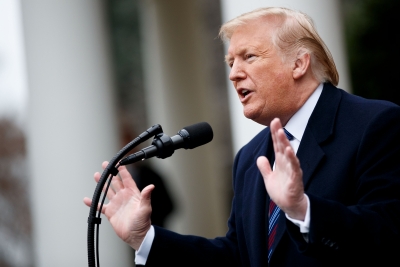 A majority of Americans want probes against former President Donald Trump to continue but an even greater number want to observe a “protest day” for the country being steered in the wrong direction by politicians.

Americans are a dissatisfied public, with three quarters saying the county is headed in the wrong direction, while a record 58 per cent say that America’s best years are behind it and 61 per cent who say that they’re willing to carry a protest sign for a day because they’re so upset, an NBC poll conducted recently after the FBI raid at the Mar a Lago residence of Trump reveals.

The poll paints a mixed picture of the November 2022 midterm landscape for the house of reps, with President Joe Biden’s job rating dipping to low 40s. Republicans narrowly lead on congressional preference, but Democrats nearly tie Republicans on voter enthusiasm with “threats to democracy” overtaking the cost of living as the top issue facing the country for voters.

“Politically, for Joe Biden and Democrats, the news is not all bad,” said Democratic pollster Jeff Horwitt of Hart Research Associates, who conducted this survey with Republican pollster Bill McInturff of Public Opinion Strategies. “Heading into Labor Day, the political dynamics could be worse (for Democrats), but they also need to get a lot better and fast,” he added.

McInturff agrees that the environment has improved for Democrats since earlier this year. But he argues that the main fundamentals – the President’s job rating, the nation’s direction – are breaking against the party. “America is singing the blues, and that is bad news for the Blue Team in November,” he said.

The NBC News poll was conducted August 12-16, during and after a tumultuous period for Trump – when the FBI searched his Florida home, when Trump attorney and ally Rudy Giuliani revealed he is a “target” in the probe of alleged election interference in Georgia, and as a former Trump business executive was pleading guilty for tax fraud in a Manhattan court in New York.

While all voters prefer the investigations continuing by 17 points rather than stopping, the margin holding Trump responsible for the January 6 attack on the US Capitol is surprisingly much smaller.

A combined 50 per cent of voters say Trump is solely or mainly responsible for Jan. 6 events – up 5 points since the May NBC News poll, before the House committee investigating the attack began holding multiple televised hearings. That’s compared with a combined 49 per cent saying Trump is only somewhat responsible or not responsible at all, which is down 6 points from May.

Biden’s job rating remains in the low forties as the poll also was conducted after a strong stretch for the President, which included Congress passing climate and health care legislation and the Bureau of Labor Statistics reporting that 528,000 jobs were created last month. But the survey doesn’t show a significant improvement in the president’s standing, with 42 per cent of registered voters approving of Biden’s work and 55 per cent disapproving. In May this year, Biden’s job approval stood at 42 per cent among registered voters and 39 per cent among all adults.

Looking ahead to November’s midterm elections, 47 per cent of registered voters prefer Republicans winning control of Congress, while 45 per cent want Democrats in charge. In May’s poll, the parties were tied on this question, at 46 per cent each.

Democrats close the enthusiasm gap despite Biden’s approval rating and the GOP’s lead in congressional preference (albeit within the poll’s margin of error), the NBC News survey shows an improvement for Democrats since earlier this year.

According to the survey, 68 per cent of Republicans express a high level of interest in the upcoming election versus 66 per cent for Democrats.

The pollsters who conduct the survey attribute the increased Democratic enthusiasm to the June Supreme Court decision overturning the 1973 Roe v. Wade banning abortions and the President signing off an executive order to protect abortion rights at any cost.

“The Supreme Court ruling has shaken up the electorate,” said Horwitt.

Indeed, the poll finds 58 per cent of voters disapproving of the Supreme Court’s ruling overturning Roe v. Wade and a constitutional right to an abortion, compared with 38 per cent who approve.

And the poll shows that “threats to democracy” has overtaken “cost of living” as the most important issue facing the country, and that the climate/health care legislation Biden signed into law last week is more popular than unpopular (42 per cent call it a good idea, while 31 per cent say it is a bad idea).

Upset enough to carry a protest sign for an entire day demonstrates a deep dissatisfaction in the American public. Three-quarters of voters – 74 per cent – say the country is headed in the wrong direction, representing the fifth-straight NBC News survey showing this number in the 70s.

Additionally, 58 per cent believe America’s best days are behind it, which is the highest percentage on this question dating back to 1990. Another 68 per cent of voters think the US is currently in an economic recession.

And six-in-10 – 61 per cent – say they’re so upset by something that they’re willing to carry a protest sign for an entire day. Asked what their protest sign would say, the top responses among Democratic voters are “Women’s rights”, “Equal rights”, “Prosecute Trump” and “Abortion rights”.

And the top responses among Republican voters are “Impeach Biden”, “Protect our freedom”, “Protect 2nd Amendment”, and “Stop Democrats”.

The NBC News poll was conducted August 12-16 of 1,000 registered voters – including 750 reached by cell phone – and it has an overall margin of error of plus-minus 3.1 percentage points.