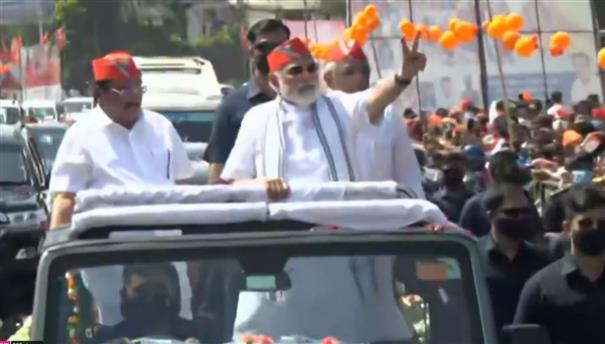 Ahmedabad: Prime Minister Narendra Modi held a roadshow here on Friday, a day after the BJP stormed back to power in Uttar Pradesh, and also retained Uttarakhand, Manipur and Goa. Riding in an open jeep decorated with floral garlands, Modi waved to the hundreds of supporters and admirers who gathered by the roadside as his roadshow began from the airport to Kamalam, BJP’s state headquarters in Gandhinagar.

Later in the day, Modi is scheduled to address a rally of over one lakh elected representatives of panchayat bodies as part of his two-day visit to Gujarat, a state BJP leader said.

Modi’s visit to his home state comes a day after the declaration of results of the Assembly elections in five states. Gujarat will go to polls at the end of this year.