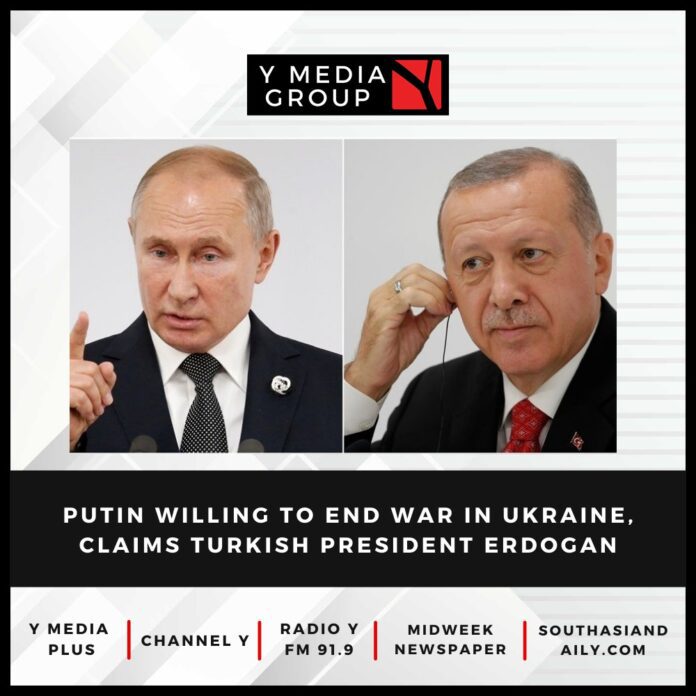 Turkish President Recep Tayyip Erdogan has said that he believes the Russian President is seeking an end to the war he began in Ukraine, and that a “significant step” will be made, media reports said.

Erdogan said his impression from his recent talks with Vladimir Putin is that the Russian leader wants to “end this as soon as possible”, BBC reported.

With Ukraine recapturing swathes of its territory this month, the Turkish leader indicated that things are “quite problematic” for Russia.

Erdogan spoke of having “very extensive discussions” with Putin at a summit in Uzbekistan last week.

In an interview, the Turkish leader said he gained the impression that the Russian President wants a speedy end to the war.

“He is actually showing me that he’s willing to end this as soon as possible,” Erdogan said, adding, “That was my impression, because the way things are going right now are quite problematic,” BBC reported.

He also said 200 “hostages” would soon be exchanged between the two sides. Erdogan gave no further detail of who all would be included in such a prisoner swap.

Erdogan has repeatedly sought to mediate during the war, promoting a “balanced” stance for Nato member Turkey, while opposing Western sanctions on Russia.

He helped the UN mediate a resumption of grain exports from Ukraine and said last week that he is trying to organise direct ceasefire talks.

Meanwhile, two months after Russian forces seized control over the entire eastern region of Luhansk, Ukraine has reclaimed part of the territory.

Luhansk’s Ukrainian leader Serhiy Haidai said Russian forces have retreated from the village of Bilohorivka – but are doing all they could to dig in elsewhere, BBC reported.