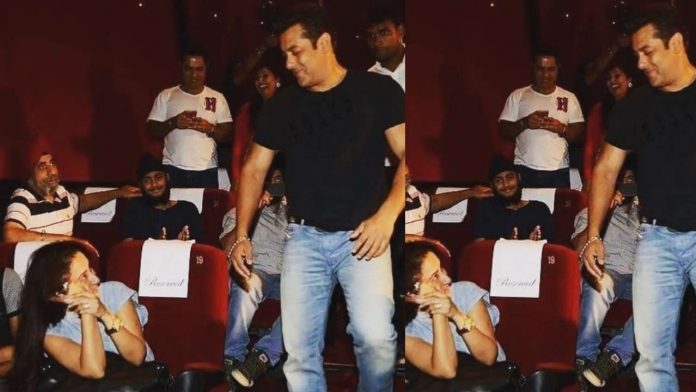 Superstar Salman Khan has millions of devoted fans who keep a keen eye on the ‘Sultan’ actor’s life and keep sharing his pictures on social media. Among all such pictures, one photo that has caught everyone’s attention is Salman being clicked alongside a beautiful girl in a theatre.

The photo, shared by Salman’s fan page ‘Being Salman Khan’, has gone viral on the photo and video sharing platform owned by Facebook. In the photo, the ‘Kick’ actor is seen entering a theatre and looking at a beautiful girl seated at the end of the row. The superstar and the mystery girl cannot seem to hold their smiles as they share glances at each other.

Salman’s fans have flocked to the comments section eagerly wanting to know the identity of the mystery girl. As one user commented, “Salman bhai shaadi kar lo (Salman brother get married)”, another wrote, “I Love You So Much Mr. Salman Khan”. Some netizens even trolled the superstar seeing the age difference between him and the girl. One Instagram user wrote, “She is looking for a father figure”, while another commented, “Arre Salman bhai ne budhape mai shadi ka plan hai kya (Salman bhai has planned his wedding at old age)”.