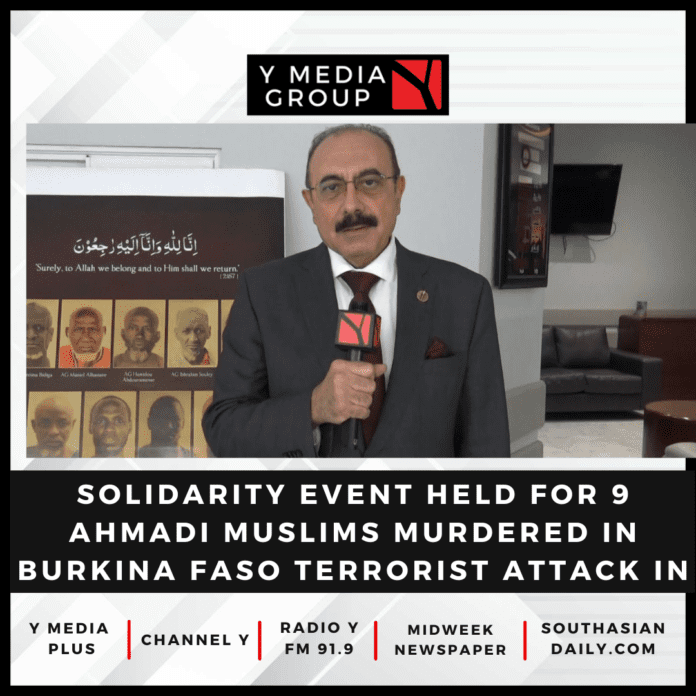 NINE AHMADI MUSLIMS WERE MARTYRED IN A HORRIFIC ATTACK IN BURKINA FASO
THE ATTACKERS HAVE THREATENED TO KILL ALL AHMADIS IF THEY DO NOT RENOUNCE AHMADIYYAT AND IF THEY RETURN TO THE MOSQUE AGAIN
THE AHMADIYYA MUSLIM COMMUNITY HAD PROVIDED ALL BASIC NECESSITIES IN THIS VILLAGE TO ALL
JANUARY 11, 2023: WE ARE AGGRIEVED TO REPORT AN INCIDENT OF A TERRORIST ATTACK ON A LOCAL AHMADIYYA COMMUNITY IN MAHDIABAD – A REMOTE VILLAGE IN BURKINA FASO
The village is situated at a distance of 45km from Dori city towards the border of Niger.
According to the reports, Ahmadis were preparing for the Isha prayers on January 11, 2023, when terrorists took control of the mosque and started delivering a speech about their movement. They asked the community about their beliefs and showed discontent. They declared Ahmadis to be infidels. They took the Imam of the mosque Mr Bidiga BOUREIMA to a nearby community center and threatened him to renounce Ahmadiyyat. The terrorists also inquired about other Ahmadi concentrations in Burkina Faso. This is particularly concerning as this poses a similar threat to other Ahmadis.
The Imam was brought back to the mosque and all the elders were threatened that unless they renounced Ahmadiyyat, they would be killed. They all preferred martyrdom to leaving Ahmadiyyat. The Imam was the first one to die. The terrorists then mercilessly killed eight more elders one by one and each of them was given a chance to renounce Ahmadiyyat. To Allah do we belong and to Him shall we return.

There is another mosque in the village, which belongs to the Wahabi sect, however, the terrorists did not harm anyone belonging to that mosque.
We are deeply aggrieved by the incident. The spokesperson of the Ahmadiyya Muslim community said;
“Our community, all around the world, is a family and we are heartbroken at the brutal murder of our brothers and grieve with their loved ones. We pray that God envelops the martyrs in His mercy.
“We also pray for the security of Burkina Faso and that the Government fulfills its duty to protect all Burkinabe people, including Ahmadi Muslims, and that the perpetrators of this heinous and evil crime be brought to justice”
It is also noteworthy that, under its project to create model villages in Africa, the Ahmadiyya Muslim Community provided this village with basic necessities such as water, solar energy, a community center, and a mosque.
Such facilities are provided by the Ahmadiyya Muslim Community regardless of one’s religious beliefs, race, or color. The Ahmadiyya Muslim Community is at the forefront of providing basic necessities, health care, and education to the deprived regions.
The National President of the Ahmadiyya Muslim Community Burkina Faso said;
“Around the World, religious extremists are tarnishing the pure and beautiful teachings of Islam in order to further their censured agenda. The innocent & peace-loving Ahmadis of Burkina Faso have been subjected to such a horrific agenda that must be denounced with the greatest severity. We condemn all such dreadful acts of the extremist religious fanatics.”

India Condemns Attack On Hindu Temples In Australia And Canada