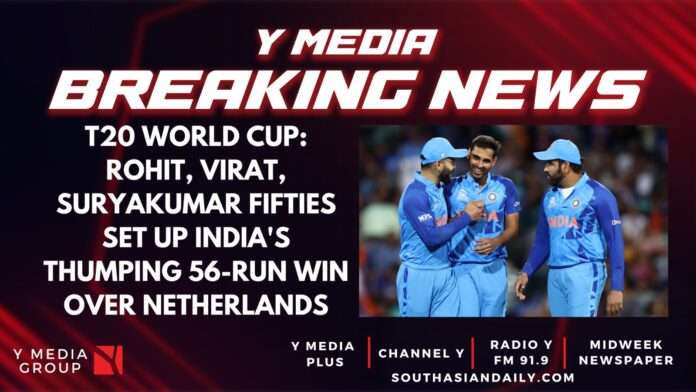 Half-centuries from captain Rohit Sharma, Virat Kohli and Suryakumar Yadav set up India’s move to the top of Group 2 points table with a thumping 56-run win over the Netherlands in their second Super 12 match of Men’s T20 World Cup at the Sydney Cricket Ground on Wednesday.

With the Netherlands putting a lid on the scoring rate, India found it difficult to break free on a two-paced pitch. But Rohit (53 off 39 balls) and Kohli (62 not out off 44 balls) managed to share a 73-run stand for the second wicket.

Suryakumar (51 not out off 25 balls) changed the tempo of the innings with his 360-degree style of batting and shared an amazing 95-run stand off 48 deliveries with Kohli for the third wicket as India posted a challenging 179/2 in 20 overs.

Electing to bat first, K.L Rahul was trapped lbw by a late inswinger from Paul van Meekeren though replays later showed the ball would have missed hitting leg-stump. With the Netherlands getting the ball to swing both ways, India struggled for fluency and timing.

Though Rohit Sharma pulled van Meekeren for a six over deep square leg and nailed a square cut through off-side for four, he wasn’t at his best. He had huge slices of luck on his side: a miscued pull off Klaassen in the fifth over was dropped by Tim Pringle at mid-on, and in the next over, his uppish flick off van Meekeren landed just in front of Pringle again at short fine leg.

With Kohli struggling to find boundaries, Rohit cut loose by pulling Logan van Beek for a six over wide long-on. Luck again fell in his favour as he successfully survived an lbw appeal on the very next ball.

From there, Rohit found his groove, uppishly cutting Bas de Leede through backward point for four, followed by a six through top-edge off the pull for successive boundaries. He then hit Pringle for back-to-back fours through leg-side to get his fifty in 35 balls. But in the next over, he was caught at deep mid-wicket off Klaassen while swiping across the line.

Suryakumar’s arrival opened the floodgates for India. He used the crease well and showed his impeccable wrist work to hit three fours in his first seven balls. He upped the ante by striking successive fours off de Leede in the 16th over.

Kohli also joined the boundary party by heaving de Leede over short fine leg and then lofted Klaassen over mid-off for four more in the 17th over. He enthralled the crowd with a superbly timed loft over extra cover for six and bring up his second fifty on the trot in 37 balls.

Suryakumar Yadav carved two delightful fours before ending the innings with a beautifully flicked six over deep backward square-leg off Logan van Beek and getting his fifty in 25 balls as India got 112 runs off the last ten overs.

In reply, the Netherlands’ chase never got going as Bhuvneshwar Kumar kept things tight in Power-play with successive maidens and clean-bowled a struggling Vikramjit Singh. Max O’Dowd began with nicely timed square drives off Arshdeep Singh to get a brace of fours and flicked Mohammed Shami through square leg for his third four.

His promising stay at the crease came to an end when he moved across to sweep, only for Axar Patel to rattle his middle stump with a straight delivery. Patel had another wicket to his name when he made de Leede reach out for outside the off-stump ball and sliced straight to point.

Ravichandran Ashwin made a double strike in the 13th over — Colin Ackermann holed out to deep mid-wicket and four balls later, Tom Cooper swept straight to deep square-leg in a span of four balls.

Pringle hit a cameo of 20 off 15 balls, dispatching Ashwin over long-on for six and flicking Arshdeep for four. But Shami extracted a leading edge off his flick and was caught by mid-off.

Bhuvneshwar got his second wicket when captain Scott Edwards miscued a slower ball to mid-off. Arshdeep joined the wicket-takers column when van Beek was late to pull a bouncer and was caught behind.

He ended the 18th over by trapping Klaassen lbw with a fantastic yorker and getting the DRS in his favour. Though Arshdeep was hit by van Meekeren for a hat-trick of fours in the last three balls of the innings, the result was a foregone conclusion by then.