US lawmakers arrive in Taiwan days after Pelosi’s visit 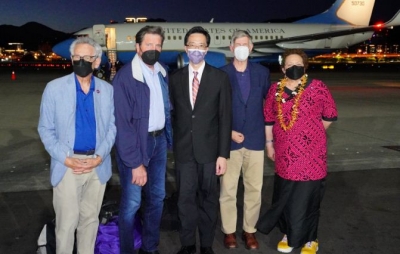 Five US lawmakers arrived in Taipei for a surprise visit on Sunday amid escalated tensions across the Taiwan Strait, following a trip earlier this month by Nancy Pelosi, the Speaker of the US House of Representatives.

According to the American Institute in Taiwan (AIT), which acts as the de facto US embassy, the two-day visit is part of a larger trip to the Indo-Pacific region. Discussions are to focus on regional security, trade and investment, among other issues, dpa news agency reported.

China increased pressure on Taiwan both militarily and economically after a 19-hour visit to Taipei by Pelosi on August 2-3.

Taiwan has had an independent government since 1949, but China considers the island part of its territory. In 1979, Washington formally cut diplomatic ties with Taipei and built relations with Beijing.