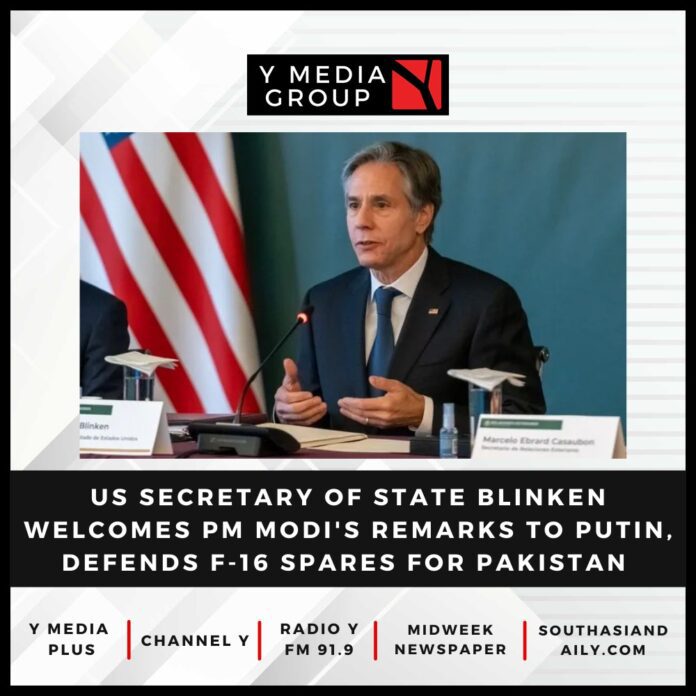 US Secretary of State Antony Blinken on Tuesday welcomed Prime Minister Narendra Modi’s recent public rebuke of Russian President Vladimir Putin for invading Ukraine, saying the Indian leader spoke for the rest of world that this is not the “era for war”.

However, Blinken also defended the Joe Biden administration’s proposal to provide Pakistan with $450 million worth of “sustainment” package for its fleet of F-16 aircraft, ignoring Indian protests that Islamabad does not use these planes only for counter-terrorism operations, as stated by the US, but also against India.

Blinken also addressed the issue of long waiting period for visas and blamed it on Covid-related disruptions. He said the US has a plan for mitigating it for India and that it will be rolled out in a few months.

Blinken spoke to reporters along with India’s External Affairs Minister S. Jaishankar after their bilateral meeting, and a working dinner the night before.

The two officials had met last week on the sidelines of the UN General Assembly meetings, most significantly for the first such meeting with counterparts from the Quad parter countries Australia and Japan — the first Quad meeting at the UNGA, with plans to make it an annual affair deepening the institutionalisation of the platform that is witnessing a robust second-coming.

“I really want to emphasise what Prime Minister Modi said because he captured as well as anyone I’ve heard fundamentally what this moment is about as he said, ‘This is not an era, this is not a time for war’,” Blinken said, referring to Modi’s comments to Putin in Samarkand, Uzbekistan.

“We could not agree more,” Blinken said, adding, “We saw the aggression, the threat of the aggression mounting from Russia against Ukraine last year. We warned the world about it, and we tried everything possible to avert it through diplomacy. Unfortunately, President Putin pursued his aggression nonetheless.”

The Russian invasion of Ukraine had introduced a rare area of dissonance in the India-US relationship as New Delhi refused to condemn it as robustly as the US-led coalition of western nations wanted. India also stepped up its purchases of Russian oil, which, the west argued, mitigated the pain of western sanctions on Russia somewhat.

Modi’s remarks to Putin on the sidelines of the Shanghai Cooperation Organisation’s (SCO) meeting in Samarkand not only erased all of the disquiet felt with the Indian position in Washington, but earned India a position potentially in a peace process; Mexico has also suggested Modi should be on a peace committee.

Meanwhile, the top US diplomat seemed less impressed by India’s objections to the proposed $450 million worth of spares for Pakistan’s F-16 aircraft, something which Jaishankar hit out against soon after arriving in Washington for this visit. His criticism of the deal followed “concerns” conveyed by Defence Minister Rajnath Singh to his US counterpart Lloyd Austin in a phone call earlier.

“To be very clear, and it’s important, this is a sustainment programme for F-16s that Pakistan has long had. These are not new planes, new systems, new weapons. It’s sustaining what they have,” Blinken said, adding, “We have a responsibility and an obligation to deliver, we provide military equipment to make sure that it’s maintained and sustained. That’s our obligation.”

He added that Pakistan’s programme bolsters its capability to deal with terrorist threats emanating from Pakistan and the region.

India has dismissed this claim, which was made on the grounds provided by the administration to the US Congress as justification. Jaishankar said on Sunday that no one is fooled by these claims as Pakistan has used these aircraft for purposes other than for fighting terrorists. It was used against Indians in February 2109, he said.

The two officials were bullish about the relationship though.

“Today, the United States is very international, very much more open to engage with a country like India, which is actually thinking beyond traditional alliances, which has been very effective at finding common ground with potential or actual partners,” Jaishankar said in response to a question about the trajectory of the bilateral relationship.

He added: “I think the more we work together, the more we engage each other. I think many more possibilities will emerge. So very frankly, that’s a long way of saying that I’m very bullish.”

Echoing these sentiments, Blinken said, “No two countries have a greater ability, and I think, opportunity and responsibility to try to shape the future of the century than the United States and India as the world’s two largest democracies.”

He added: “That doesn’t mean that we don’t have differences. We do and we will, but it also means that because of the depth and quality of the dialogues we have, we talk about everything.”

Jaishankar then pointed to one area of potential irritation.

“We spoke over the last two days of our commitment to practising and furthering democracy, human rights and good governance,” Jaishankar said, adding, “Each country approaches the set of issues from their history, tradition and societal context. Our yardstick for judgment are the integrity of the democratic processes, the respect and credibility to the command with the people and the non-discriminatory delivery of public goods and services.

“India does not believe that the efficacy or indeed the quality of democracy should be decided by vote banks. This is an area where we look forward to a healthy exchange of views. There will be convergence and best practices that we can both profit by and perhaps even share with third countries.”

India bristles as being lectured by the US on human rights and democracy, something that Washington does through the various arms of the government and the legislature.

Jaishankar has made his mind known on this issue before — that India will not be lectured, and if it is, it reserves the right to point out the flaws of the other side as well.