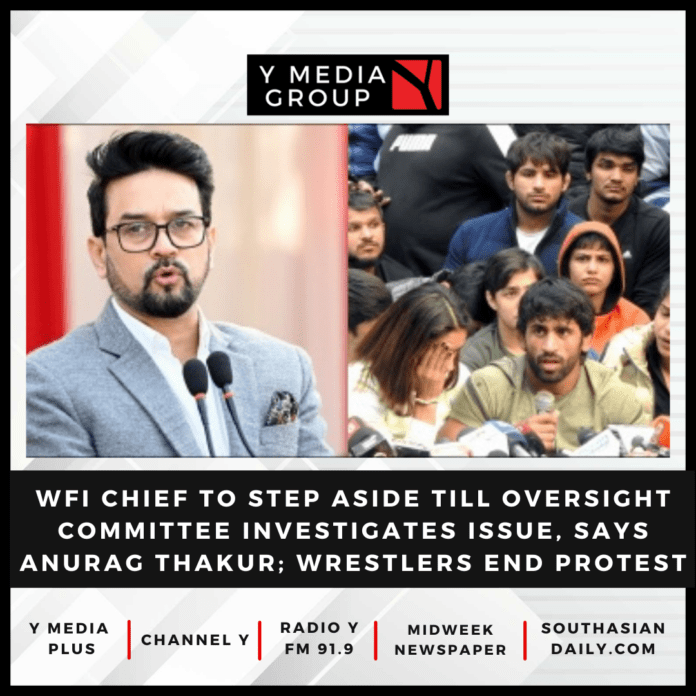 Indian wrestlers called off their protest late on Friday evening after a second meeting at the Union Sports Minister Anurag Thakur’s residence in the national capital.

The meeting lasted beyond midnight, following which wrestler Bajrang Punia announced to the media that the other wrestlers are calling off the protest after assurance of action from Thakur against the Wrestling Federation of India (WFI).

“After receiving the assurance from our Sports Minister, we have decided to call off the protest,” said Punia.

The meeting at the Sports Minister’s residence lasted for more than five hours after the wrestlers — Bajrang Punia, Vinesh Phogat, Sakshi Malik, Ravi Dahiya, Deepak Punia, and others — reached at 7 p.m.

“I want to thank all the players as they have provided us with valuable inputs and our discussions have been about taking forward the sports. We have seen changes in multiple sports federations in the recent past and this will be looked upon,” he added.

“The demands put in by the wrestlers will be taken care of. We will constitute an oversight committee and will announce the name of members tomorrow.”

He assured that an unbiased probe will be carried by the oversight committee on all the accusations levelled against the WFI and its President with the latter stepping aside from his post.

“The committee will also look into the daily affairs of the federation and the WFI President will step aside till the probe goes on. He will also cooperate in the investigation,” the Sports Minister confirmed.

Bajrang Punia also added that Thakur has also ensured safety to the wrestlers as he hoped that the committee will conclude its investigation in a month’s time.

“Thank you everyone for your valuable support. Hopefully, the committee will give results in one month and we are hopeful of an independent investigation. Our security will be taken care of as assured by the Sports Minister,” he said.