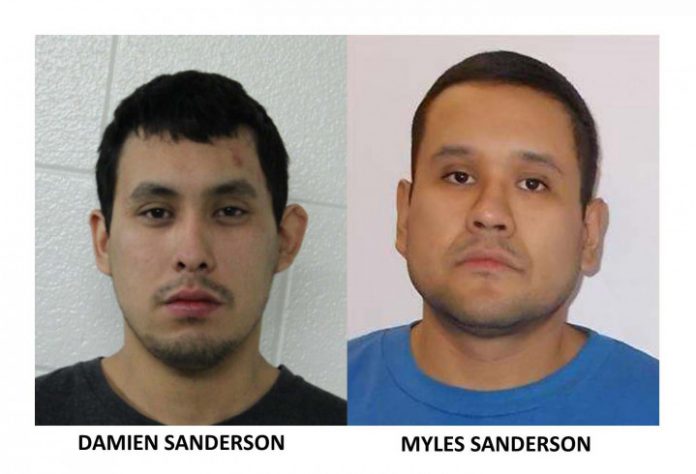 On September 4, 2022, at 5:40 this morning, the Saskatchewan RCMP Divisional Operational Communications Center, or our DOCC, received a call reporting a stabbing on the James Smith Cree Nation. In the following minutes, our DOCC received multiple calls reporting additional stabbings, at different locations in the community. The suspects named were Damien Sanderson and Miles Sanderson.

Melfort RCMP officers and other resources were immediately dispatched to the locations in the community, to help the victims and to track the two suspects.

At 7:12 a.m., Saskatchewan RCMP issued an initial Dangerous Persons Alert to residents of the James Smith Cree Nation and surrounding communities – including Candle Lake, Prince Albert, Melfort, Humboldt and Rosthern – informing the public of stabbings being committed by two male suspects, and asking the public to seek immediate shelter and shelter in place.

At 7:57 a.m., an updated Alert was sent to the same communities, with the names, descriptions, and pictures of the two suspects.

At 8:20, the Dangerous Persons Alert was extended to the entire Province of Saskatchewan, as the investigation confirmed the two suspects – Damian Sanderson and Myles Sanderson – were travelling in a vehicle.

At 9:45 a.m., a fourth Dangerous Persons Alert was sent to the entire province, indicating multiple victims in multiple locations were located, including one victim outside of the James Smith Cree Nation in the community of Weldon, Saskatchewan, and that some victims were believed to be attacked randomly. A description of the suspect vehicle and the correct picture to identify Myles Sanderson were included.

At 11:25, we sent requests to Manitoba RCMP and Alberta RCMP to extend the Dangerous Persons Alert to the residents of their provinces.

At 12:07, a fifth Alert update was sent advising the residents of Saskatchewan the suspect vehicle had been seen by a driver on Arcola Avenue in Regina and asked the public in Regina to consider sheltering in place.

At this point in our investigation, we have located 10 deceased individuals and are investigating 13 locations in the communities of the James Smith Cree Nation and Weldon in Saskatchewan.

Currently, we are actively looking for the two suspects, helping the victims and investigating the many crime scenes. We are dedicating a maximum number of resources to this investigation, and thank our many provincial and inter-provincial policing partners who are providing additional support.

Let me be clear, we are still looking for the two suspects. We are asking residents across Saskatchewan and our neighbouring provinces to be vigilant. At this stage in our investigation, we believe some of the victims have been targeted by the suspects and others have been attacked randomly.

The two suspects are Damien Sanderson and Myles Sanderson.

They are considered armed and dangerous. They are believed to be in a black Nissan Rogue SUV with Saskatchewan licence plate 119 MPI. Their location and direction of travel are unknown.

Previous articleGurpreet Singh Of Brampton Wanted By York Police In Connection With Carjacking In Newmarket
Next articleIs it a Cold or the Flu?