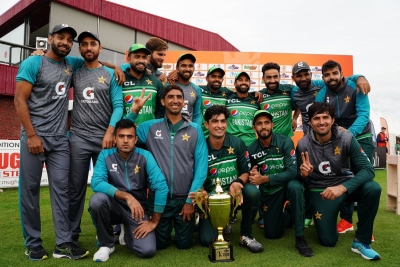 The Netherlands produced a compelling performance to come close to beating Pakistan in the third and final ODI but the visitors held their nerve to win by nine runs and clinch the series 3-0, here on Sunday.

Despite the 0-3 loss, the Netherlands showcased fight and played some exemplary cricket right through the series.

After winning the toss and opting to bat first, Pakistan didn’t have a great start as the Netherlands’ bowlers impressed with the new ball. Vivian Kingma prized out debutant Abdullah Shafique in the second over of the innings.

Fakhar Zaman and Babar Azam then rebuilt for Pakistan. However, the Netherlands managed to find a breakthrough when Logan van Beek cleaned up Zaman (26) in the 18th over. Agha Salman gave Babar fine company as the skipper completed his ninth fifty-plus score in his last 10 innings.

Pakistan lost three wickets in quick succession in the middle overs as the Netherlands made a strong comeback. Salman, Khushdil Shah and Mohammad Haris were dismissed in the space of 31 runs.

Babar continued edging close to a hundred, but he couldn’t eventually get there as a stunning return catch from Aryan Dutt ended his knock, nine short of a ton. Pakistan were eventually bowled out for 206 in 49.4 overs.

In reply, the Netherlands too had a poor start. Naseem Shah continued to make a strong impression on the tour as he sent back Max O’Dowd and Musa Ahmed inside the first 10 overs to give Pakistan a rousing start.

The 19-year-old speedster was in fine rhythm and finished his first spell with figures of 5-0-14-2. He returned later at a crucial point in the game to clean up skipper Scott Edwards and added another wicket, that of Teja Nidamanuru, later to break a threatening half-century stand.

Naseem finished with career-best figures of 5 for 33, bringing Pakistan back into the contest every time he came on with the ball. Naseem was ably supported by Mohammad Wasim, who picked up the big wickets of Vikramjit Singh and Tom Cooper to finish with a four-wicket haul.

However, the host didn’t give up that easily. Led by opener Vikramjit and in-form Cooper, the Netherlands pushed Pakistan in the run chase. Vikramjit completed his second half-century in the series while Cooper made it three fifties in three outings. But, neither innings was quite enough to give the Netherlands the final push needed for a win.

While Vikramjit’s innings came to an end on 50 as he nicked Wasim to the wicketkeeper, Cooper kept the Netherlands in the hunt until late in the run chase, only to miscue a slog off the same bowler in the 46th over to be dismissed for 62.

The Netherlands’ tail pulled them close to the target, but they eventually were bowled out for 197-10 in 49.2 overs and couldn’t cross the final hurdle.