45% Americans Want US To Become A ‘Christian Nation’ 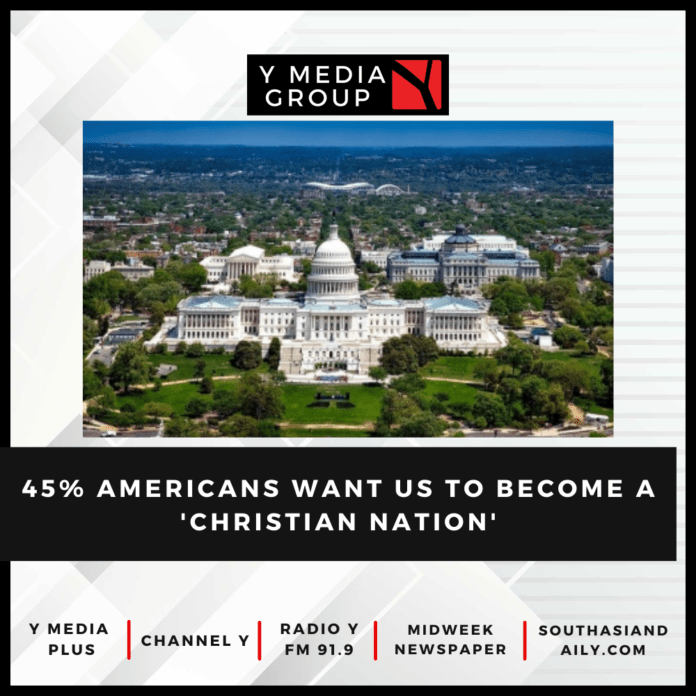 More than four in 10 Americans believe the United States should become a ‘Christian Nation’, according to a new survey by the Pew Research Center, an American think-tank based in Washington.

The survey also found that most Americans — eight in 10 — believe the US was founded as a Christian nation.

At the same time, most Americans surveyed by Pew also believe that churches and other houses of worship should stay out of politics and should not endorse election candidates or expound their views on day-to-day social and political issues. In short, keep out of state matters.

Christian nationalism is defined as an ideology that says that Christianity is the foundation of the United States and the state must protect that relationship. Many believers advocate for the Bible to shape the laws of the land, and take precedence over local laws when in conflict.

Some of former President Donald Trump’s closest aides and followers believe in this ideology. Former National Security Advisor Michael Flynn is among them, as is Doug Mastriano, the Republican nominee for the governorship of Pennsylvania, who has been endorsed by Trump.

The Pew survey did not show any uptick in believers in Christian nationalism with comparative data, but Ryan Burge, a political scientist, said that the phrase ‘Christian nationalism’ figured in more tweets in July 2022 than in the entire 2021 — 289,000 to around 200,000.

Most worrying perhaps for non-Christian Americans — including those of Indian heritage, who are mostly of Hindu faith — supporters and believers of Christian nationalism do not view religious diversity kindly and, in fact, they find the presence of people of other faith detrimental to the purity of America as a Christian nation.

Republican Americans — such as Trump’s aide Flynn and supporter Mastriano — are seen to be gravitating towards this ideology in larger numbers as compared to Democrats. And, it should be noted, not all Republicans subscribe to this ideology and the party remains apparently committed to diversity.

Christian nationalism has been on the rise in other countries as well, such as Brazil, which its President Jair Bolsonaro has declared as a ‘Christian country’.