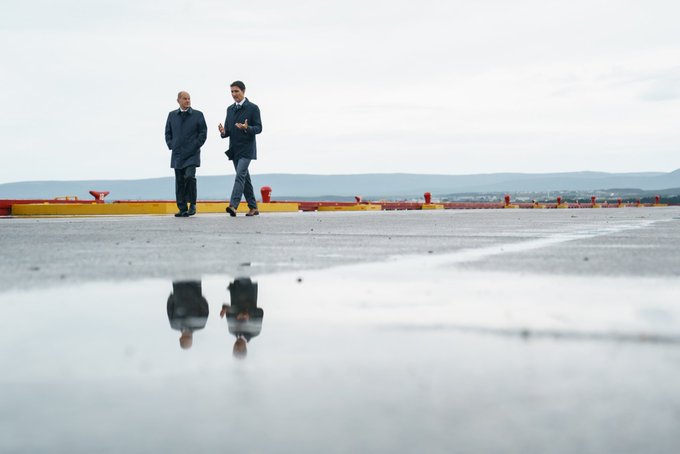 As Russia continues to weaponize energy in its illegal war with Ukraine, Canada is working with European partners to strengthen global energy security and accelerate the global clean energy transition. To these ends, Canada’s allies in Europe have initiated efforts to displace imports of Russian oil and gas in the short term while accelerating efforts to deploy renewable energy and clean hydrogen. The Government of Canada is committed to supporting these efforts.

Today, the Honourable Jonathan Wilkinson, Canada’s Minister of Natural Resources, and Robert Habeck, Vice-Chancellor of Germany, were joined by Canada’s Prime Minister Justin Trudeau, Germany’s Chancellor Olaf Scholz, Newfoundland and Labrador’s Premier Andrew Furey and German Ambassador Sabine Sparwasser for the signing of a Joint Declaration of Intent committing the two countries to collaboration in the export of clean Canadian hydrogen to Germany.

The Canada–Germany Hydrogen Alliance will commit the two countries to:

The Alliance will build on Canada’s Hydrogen Strategy and mark a step toward Canada’s objective of becoming a top global supplier of clean hydrogen. This Declaration sends a clear signal to the private sector and to sub-national leaders in both countries that Canada and Germany are committed to a policy and regulatory environment that will facilitate and encourage investment in the hydrogen value chain in both countries.

Canada has a long history of private and public leadership in hydrogen innovation, including fuel cell technology. In fact, Canada is home to the largest number of hydrogen engineers in the G20. Developing hydrogen will create good, middle-class jobs, grow local economies and fight climate change. Canada will continue to leverage this advantage — along with its bounty of natural resources — to build a clean and secure energy future at home and abroad.

Previous articleCNE marks 100th Anniversary of The Warriors’ Day Parade 2022 in Toronto, Ontario
Next articleY Media Expresses Its Heartfelt And Deepest Condolences For The Demise Of Anmol Gupta, Son Of Gaurav Kumar (Planet Financial). With Deepest Sympathy, We Wish For Peace And Comfort During This Time Of Great Loss. May His Soul Rest In Peace!