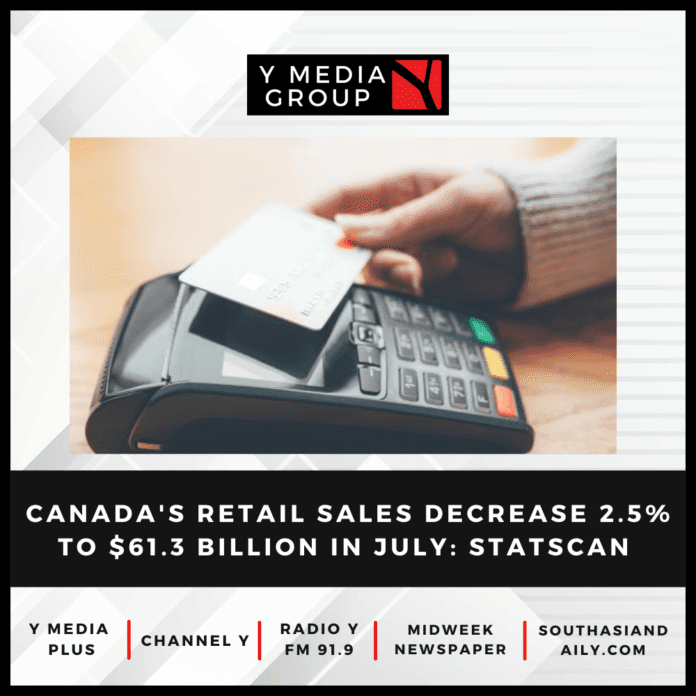 Retail sales decreased 2.5% to $61.3 billion in July, the first decline observed in seven months. Sales were down in 9 of 11 subsectors, representing 94.5% of retail trade. The decrease was driven by lower sales at gasoline stations and clothing and clothing accessories stores.

In volume terms, retail sales were down 2.0% in July.

Given the continually evolving economic situation, Statistics Canada is providing an advance estimate of retail sales, which suggests that sales increased 0.4% in August. Owing to its early nature, this figure will be revised. This unofficial estimate was calculated based on responses received from 51.1% of companies surveyed. The average final response rate for the survey over the previous 12 months has been 91.0%.

Sales at motor vehicle and parts dealers fell 0.5% in July. The decline was largely the result of lower sales at new car dealers (-0.6%). Lower sales were also reported at used car dealers (-1.7%) and automotive parts, accessories and tire stores (-0.9%). In contrast, other motor vehicle dealers (+2.4%) were the only store type in this subsector to increase.

Core retail sales decreased 0.9% in July—the first decrease in seven months. Leading the decrease were sales at clothing and clothing accessories stores (-3.3%). The decrease was observed across all three store types in the subsector, with clothing stores (-3.3%) experiencing the largest decline.

Lower sales were also observed at food and beverage stores (-0.8%), which were led by a decline in supermarkets and other grocery (except convenience) stores (-0.9%) and beer, wine and liquor stores (-1.2%).

The largest increase to core retail came from miscellaneous store retailers, which increased 0.7%. Stores in this subsector include pet stores, cannabis stores and office supplies and stationery stores.

Chart 2
Sales decrease in 9 of 11 subsectors in July

Sales down in seven provinces

Retail sales decreased in seven provinces in July, led by lower sales in Ontario (-5.0%). Leading the decline in Ontario were lower sales at gasoline stations. Gasoline prices fell the most in Ontario, where the provincial government temporarily lowered the gasoline tax. In the census metropolitan area (CMA) of Toronto, retail sales fell 5.7%.

On a seasonally adjusted basis, retail e-commerce sales were down 0.7% in July.