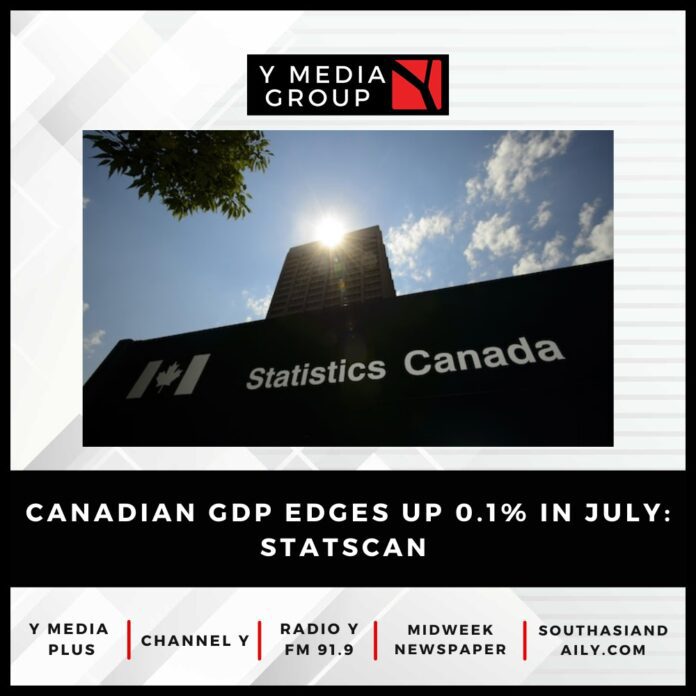 Advance information indicates that real GDP was essentially unchanged in August. Increases in retail and wholesale trade, as well as in agriculture, forestry, fishing, and hunting were offset by decreases in manufacturing and oil and gas extraction. Owing to its preliminary nature, this estimate will be updated on October 28 with the release of the official GDP data for August.

The mining, quarrying and oil and gas extraction sector expanded 1.9% in July, following slight declines in the previous two months, with growth in all three subsectors.

Oil sands extraction (+5.1%) increased strongly in July, following decreases in the previous two months. An increase of synthetic oil production coupled with a record level of production of marketable crude bitumen in Alberta contributed the most to growth. Oil sands output increased following maintenance turnarounds at facilities in the second quarter of 2022, which constrained production leading up to July.

Non-metallic mineral mining and quarrying increased 2.0%, reaching its highest level of output since July 2020, led by potash mining (+3.2%) for which both production and export volumes have exhibited an upward trend over the last five quarters.

Following record-high exports in 2020, export volumes of wheat dropped at the end of 2021, and lower volumes persisted in the first half of 2022. Amid the expected rebound in wheat production in the new crop year, as well as the conflict in Ukraine and stronger demand for Canadian wheat, export volumes increased strongly in July.

Farmers’ seeding and better weather continued to provide a positive outlook for the annual harvest, aided in part by above-average precipitation in Manitoba and Saskatchewan.

Non-durable goods manufacturing was up 0.7% in July, its first increase since March, as six of nine subsectors saw growth. Contributing the most to the increase were petroleum and coal manufacturing and plastics and rubber products manufacturing, while food manufacturing (-1.8%) partially offset the gain.

Wholesale trade contracted 0.7% in July, down for the fifth time in six months, as seven of nine subsectors decreased.

Personal and household goods (-3.0%) contributed the most to the decline in July, mainly due to a drop in textile, clothing and footwear wholesaling.

Building materials and supplies also saw a notable decline, contracting 2.5% in July. The decrease was predominantly due to lower sales of lumber, millwork, hardware and other building supplies.

An increase in the machinery, equipment and supplies subsector (+1.0%) partially offset the overall decline in the wholesale trade sector.

Retail activity shrinks as prices are met with pressure

The retail trade sector contracted 1.9% in July, falling to the lowest level since December 2021, as 10 of 12 subsectors decreased. Among the widespread declines, the largest were recorded in the gasoline station and food and beverage store subsectors.

Output at gasoline stations dropped 7.1% in July, down for a third consecutive month, in spite of declines in gasoline prices amid downward pressure from ongoing concerns related to slower global economic growth and lower global demand for crude oil.

Food and beverage stores contracted 1.8% in July, down for the second consecutive month. The decrease was observed across all four store types in the subsector, with beer, wine and liquor stores along with supermarkets and other stores experiencing the largest declines.

Accommodation and food services contracts for the first time since January

Accommodation and food services contracted 1.0% in July, the first decline since January, when the sector’s activity level dropped as a result of the COVID-19 Omicron variant.

Food services and drinking places (-1.6%) mainly drove the decline, as activity levels in the subsector fell for the first time in six months.

The sector’s decline was tempered by a 0.7% rise in the accommodation services subsector. The expansion was driven by a sixth consecutive monthly increase in traveller accommodation, although July’s monthly grow rate was the slowest of the six. Continued growth in international and domestic travel activity, benefitting from looser travel restrictions, supported increased demand for such services.

Similarly, air transportation was up in July (+2.4%) for the sixth consecutive month, but at a much slower pace than the previous five months. Meanwhile, output in July sat around 40% below its pre-pandemic level.

The finance and insurance sector was essentially unchanged in July, following three consecutive declines, as increases from financial investment services, funds and other financial vehicles (+0.9%) were partially offset by decreases in banking, monetary authorities and other depository credit intermediation (-0.2%).

The increase in financial investment services, funds and other financial vehicles was offset by a decline in banking, monetary authorities and other depository credit intermediation, led by business loans, chequing and non-chequing deposits. This marked the fifth consecutive decline in non-chequing deposits, as households placed less money into savings accounts while facing inflation. Household mortgage debt increased in July, however it continued to grow at a slowing rate.

Activity at the offices of real estate agents and brokers dropped 3.4% in July, down for the fifth consecutive month, as the rising cost of borrowing further dampened home resale activity across the country.

Legal services, which derive much of their activity from real estate transactions, declined 0.3% in July.

The public sector (educational services, health care and social assistance, and public administration combined) expanded 0.4% in July as all sectors were up.

Educational services (+0.8%) contributed the most to the growth in July as all industries were up, led by elementary and secondary schools (+0.7%) and universities (+0.7%).

Public administration was up 0.5%, with all four subsectors expanding in July.