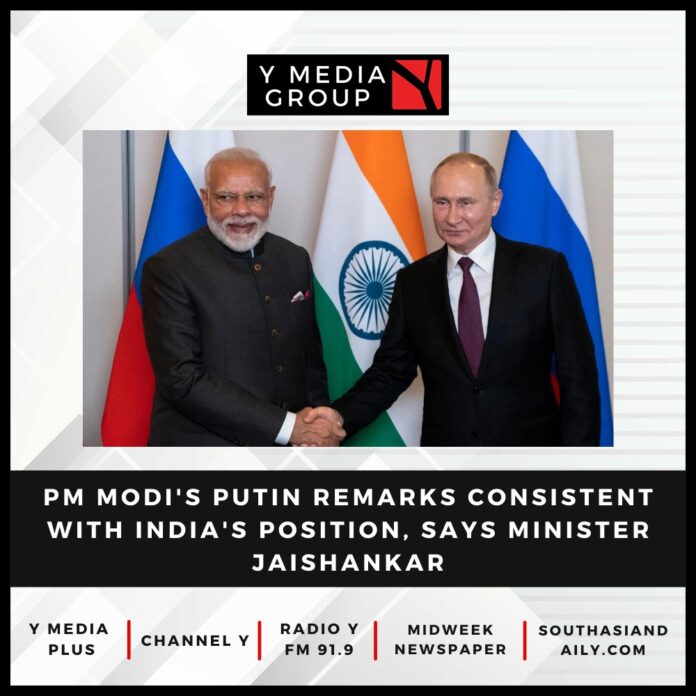 India’s External Affairs Minister S. Jaishankar has said that Prime Minister Narendra Modi’s recent remarks to Russian President Vladimir Putin – that “today’s era is not of war” – in the context of the invasion of Ukraine were consistent with the existing Indian position and they were perceived differently globally only because they were delivered in a face-to-face meeting of the two leaders.

Addressing reporters on Wednesday at the conclusion of his 10-day tour of the US that took him first to New York for the UN General Assembly (UNGA) meetings as head of the Indian delegation and then to Washington DC for bilateral talks, Jaishankar also said that the UN Security Council reforms and counterterrorism will be the focus of India’s presidency of the elite world body in December, which will also be the last month of its eighth term as a non-permanent member.

The minister’s Washington DC visit was packed with back-to-back meetings with officials – including a working dinner at Secretary of State Antony Blinken’s home, lawmakers, business leaders and policy mavens, but it was marked most starkly by considerable excitement on the American cite over Modi’s remarks to Putin on the sidelines of the Shanghai Cooperation Organization’s summit in Samarkand, Uzbekistan. It was seen – from the White House and the larger administration to US congress – as a major reversal in India’s position, from sitting on the from fence-sitting to truth-talking.

Jaishankar sought to tamp down the excitement somewhat, noting that India had been conveying the same message to Russia for a while, but privately. “The position that the Prime Minister took was consistent with a position that we have been taking earlier,” he said.

India has been expressing “concern about the conflict, about the urgency for early cessation of hostilities, about the need for dialogue and diplomacy. So there has been a steady refrain,” he said further.

He added the remarks were possibly “received and perceived in a way because it was a a face to face meeting… I think it’s understandable that a physical meeting made a stronger impact, than sort of a second hand report.”

Prime Minister Modi told President Putin on September 16, “I know that today’s era is not of war and we have spoken to you many times on the phone that democracy, diplomacy and dialogue are such things that touch the world.” It was characterised in the West as a “rebuke” of the Russian leader in a “clear reversal” of India’s position.

Secretary Blinken was effusive in his response to a question about it at a press availability with Minister Jaishankar on Tuesday. He said that Modi’s remarks “captured, as well as anyone I’ve heard, fundamentally what this moment is about. As he said, this is not an era, this is not a time for war. We could not agree more”.

Asked for the reason why Modi publicly stated what India had been saying to Putin privately on phone, the minister said it was natural for the subject to come up between the two leaders as they were meeting face-to-face for the first time since December 2021.

The Russian invasion of Ukraine had led to some difficult conversations between India and the US as New Delhi refused to condemn it as robustly as the US-west wanted, and, also, Indian not only continued to buy Russian oil but it stepped up its purchases to take advantage of the discounted rates on offer. Western government felt that India – and China – softened the sanctions imposed on Russia.

Earlier at the UNGA meetings, Mexico suggested that Prime Minister Modi be named to a panel to end the Russia-Ukraine war, along with Pope Francis. The Mexicans did not say if their proposal was linked to the Samarkand statement, but it did come in the aftermath suggesting a causal link. A response is awaited from Mexico’s permanent mission to the UN.

At the UN, India plans to use its rotational presidency of the Security Council in December to focus on reforms of the body that has made no real progress despite years of efforts. US President Joe Biden’s commitment to make it a priority has given India, which is seeking a permanent seat on the reformed council, and other advocates of change a great amount of hope. The Russian foreign minister Sergey Lavrov also spoke of UNSC reforms in his UNGA speech and named India and Brazil as deserving to be among the permanent members.

“The position President Biden put forward is the most explicit and specific articulation of the US support for reform of the UN including the Security Council,” Jaishankar said, when asked if the US was serious about reforms. “I don’t think it’s kind of business as usual,” he added.

But the minister said it’s not for any single country to carry through the reforms and, he noted, India has been very clear-eyed about the prospects, that it will not be easy. And then there are those that oppose it. “You also know where the reluctance comes from,” he said without naming any country.