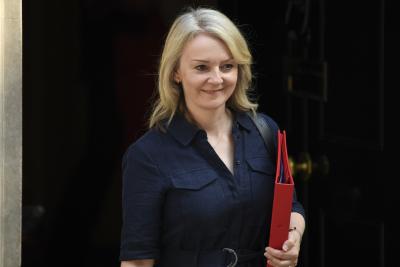 UK Foreign Secretary Liz Truss opened up an astonishing 34-point lead in the latest opinion poll of Conservative members who make up the electorate, suggesting her contender for party leadership and the PM’s post, former Chancellor of the Exchequer, Rishi Sunak has a mountain to climb, media reports said.

Truss and Sunak will face the Tory faithful Wednesday night amid strong signs that the party has already made up its mind who it wants to become its next leader and prime minister, Daily Mail reported.

The survey by YouGov for the Times, UK also pours cold water on the former Chancellor’s hopes of changing their minds, as he prepares for the third hustings in Cardiff.

More than 80 per cent of those who say they will support his rival insist their minds are already made up and they plan to cast their votes for her as soon as possible.

In another blow, the vote has been hit by a delay after spy chiefs warned that ballots “could be vulnerable to hackers”.

Originally, Conservative party members were going to be given a postal ballot which had a code with it, individual to each voter.

Afterwards, they could then submit their choice by post or online for the first time- and were able to change their decision later in the contest.

But that is no longer possible because of fears that the vote could be manipulated.

Truss, who has for weeks been the favourite to succeed Boris Johnson as Prime Minister, is supported by 60 per cent of Conservative members, Daily Mail reported.

Just 26 per cent said they were backing former chancellor Sunak, who has been launching a policy blitz in a bid to catch up with his rival.