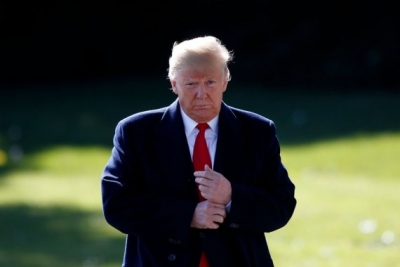 A pro-Donald Trump protest outside the FBI office here was called off as reportedly no protester turned up fearing a trap.

The Sunday demonstration was first reportedly organised by one Adam Hardage, a far right outwinger, to “protest the out-of-control FBI and its actions” against ex-President Trump, media reports say.

A Sunday demonstration outside the headquarters in the nation’s capital was first promoted by the far-right Falun Gong-backed Epoch Times, who reported shortly after the August 8 raid at Trump’s Florida residence that a veteran named Adam Hardage had called for a demonstration on the following Sunday “to protest the out-of-control FBI and its actions against President Trump”.

The outlet later reported on Thursday, just a few days before the event was scheduled to happen, that it had been cancelled after conspiracies began speculating throughout pro-Trump media forums that the event was a “trap” and could perhaps be co-opted by the same agency the supporters were protesting.

Demonstrators in support of the “twice-impeached president” did manage to successfully gather outside the federal agency’s offices in Riverside, California, with approximately 50 people convening on Wednesday � just two days after the raid � adorned with “in Trump we trust” signs and MAGA flags and hats, according to the TV Network CBS.

The far-right backlash to the raid of the one-term president’s home has prompted both the FBI and Department of Homeland Security (DHS) to issue internal bulletins warning of the possible risk of violence targeting the government employees.

“These threats are occurring primarily online and across multiple platforms, including social media sites, web forums, video sharing platforms, and image boards. The FBI and DHS would like to ensure that law enforcement, court, and government personnel are aware of the range of threats and criminal and violent incidents,” the bulletin, sent on Friday, said.

The agencies cautioned agents against an uptick in threats against both individual agents and facilities, which included a “threat to place a so-called dirty bomb in front of FBI Headquarters and issuing general calls for �civil war’ and �armed rebellion.’ “The bulletin also stated that agents who were specifically involved in the Mar-a-Lago raid have received targeted threats, including the federal judge who approved the initial search warrant, CNN reported.

Authorities also announced recently that they believe the gunman in Ohio armed with an AR-15 style rifle and believed to have been trying to break into an FBI field office on Thursday is a “suspected domestic violent extremist”, ABC News reported. Ricky Shiffer, 42, who was shot and killed after allegedly attempting to breach an FBI office in Cincinnati, was reportedly on the radar of federal investigators for several months before the Thursday attack, with investigators stating that they’d been tipped off about both the man’s involvement in the January 06 Capitol riot and a separate incident in May that prompted agents to open a separate inquiry that included conducting interviews in Florida and Ohio, media reports say.

Two of the agents whose names were assigned to the search warrant of Mr. Trump’s Mar-a-Lago resort were also circulated online last week, despite the official unsealed documents redacting their names. The warrant, which was unsealed last week, revealed that the Justice Department executed the search of the former president’s beach resort as part of an evidence-gathering step in a national security investigation about presidential records, which included classified documents. The warrant also stated that the department is also investigating possible violations of the Espionage Act, obstruction of justice and criminal handling of government records.

Previous articleAt Canada’s Major Airports, 88% Of Passengers Are Now Waiting Less Than 15 Minutes To Go Through Security Before Their Flight, Up From 63% In The First Week Of May: Minister Omar Alghabra
Next articleBrampton Transit Service Changes, effective from Tuesday, September 6