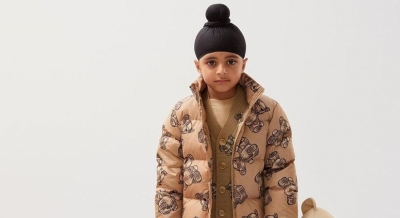 British luxury brand, Burberry, is winning people’s hearts with its latest Autumn-Winter ’22 collection for children by celebrating diversity in fashion. In a first for the brand, Burberry has featured its first Sikh child model.

Sahib Singh, is photographed dressed in a Burberry cardigan with a pair of sneakers and a matching black turban, known traditionally as a ‘Patka.’ The patka is worn by Sikh boys before they reach adolescence.

Posing for the camera in the cardigan and shorts, Singh’s back-to-school look is completed with a Thomas Burberry Bear puffer jacket.

The campaign and photographs went live on Burberry’s Instagram handle on Wednesday evening.

“Sahib had an incredible day with the Burberry team, who really looked after all the children they were shooting with. To see our son, who does look different from his peers, being given a chance by the iconic British brand was truly a milestone moment,” Harjot Kaur, the child model’s mother told Vogue India.

Little Sahib’s mother, who manages his Instagram account, posted the photo of Sahib having a good time and tagged Burberry and South Coast Kidz Ltd.

Kaur captioned it, “On this journey, we have gone through so many different emotions. We have felt a few disappointments when Sahib wasn’t chosen for a job. We never told him about any shoots until he’s fully confirmed as he doesn’t need to feel the emotions involved. The stress when the council refuses his license to “perform”. Never underestimate a parent who wants the world for their child!”

Russia waging war so Putin can stay in power ‘until the end of his life’: Zelensky