US Justice Department closing in on Trump over Jan 6 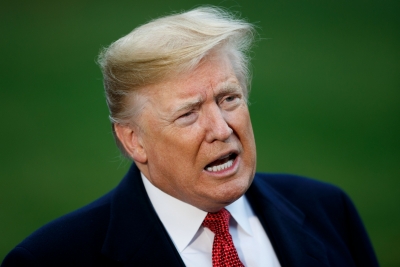 The US Department of Justice could be closing in on former President Donald Trump for his lies about the 2020 election that he lost to President Joe Biden and his efforts to overturn the outcome culminating in the historic insurrection at the US Capitol, home to American Congress, on January 6, 2021.

Prosecutors of the Justice Department have been asking witnesses in an ongoing criminal probe into the insurrection about Trump’s actions, his meetings in December 2020 and January 2021; the pressure campaign on then Vice President Mike Pence and instructions he have his lawyers and other aides regarding efforts to overturn the election outcome, according to The Washington Post, which first reported the possibility of the former president being investigated himself.

There was no official confirmation or denial of the report but in an interview to NBC, US Attorney General Merrick Garland clearly stated that the department won’t spare any one. “Look, we pursue justice without fear or favor,” he said when asked if the former president can be prosecuted.

“We intend to hold everyone, anyone who was criminally responsible for the events surrounding January 6, for any attempt to interfere with the lawful transfer of power from one administration to another, accountable,” Garland went on to say in what was seen as a rare public intervention from him.

It has been well known for some time that the Justice Department has been looking at the conduct of Trump’s former lawyers Rudy Giuliani and John Eastman – FBI agents seized Eastman’s mobile phone as he exited a restaurant recently – but Trump’s own involvement being under the scanner is a new development. And it comes amidst reports that the former President could be considering a third run for the White House.

Trump continues to lie about his election defeat, which he had tried to overturn through legal challenges, all of which failed, and efforts to manipulate the election process by pressuring poll officials to “find” votes to overcome the deficit and, when that failed as well, put together a fake list of electors to reverse the result in the final stages.

The January 6 insurrection was the final act in that effort. Charged up at a rally by Trump and others, hordes of his supporters had attacked the US Capitol to prevent a joint session of Congress – presided over by Pence – from certifying Biden’s victory. That effort failed as well.

Trump’s role in all and that of his aides, such as Chief of Staff Mark Meadows, were recounted in great detail in a string of eight public hearings conducted by a select committee of the House of Representatives over the past few weeks. The last of them, late last week, demonstrated how Trump had done nothing for more than three hours as his supporters rampaged the US Capitol building. He chose instead to watch the coverage from a room in the White House, mostly by himself.