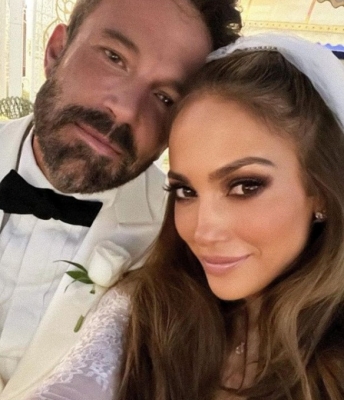 Actor-director Ben Affleck and actress-singer Jennifer Lopez have furthered their relationship. The couple celebrated their wedding with a ceremony in Georgia in front of friends and family, just over a month after saying “I do” in Las Vegas, reports People magazine.

According to People, Lopez wore a white Ralph Lauren gown with a long, flowing train and veil at Saturday’s ceremony, with Affleck in a tuxedo with a white jacket and black pants.

Photographs showed them walking down a white aisle followed by their children. Popular UK-Indian podcaster and life coach Jay Shetty officiated the ceremony.

Guests were photographed wearing all white on the grounds of Affleck’s 87-acre compound outside Savannah. Preparations for the big celebration included a marquee on the estate with white chairs set up for guests surrounded by greenery and white flowers, an all-white piano, elegant tables set up on a riverfront dock and a platform for a fireworks display.

A source earlier had told People that Affleck, 50, and Lopez, 53, had “an extraordinary weekend of celebrations planned,” including “a pre-wedding party, a ceremony and … lots of fun lined up”. And, Affleck lived by his promise.

Affleck and Lopez had a post-wedding trip to Paris last month, and celebrated the birthday of the ‘Hustlers’ actress with a romantic dinner near Eiffel Tower.