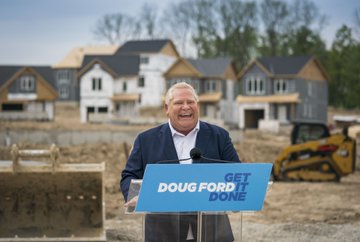 Today, Doug Ford announced that a re-elected PC government will invest $86.6 billion over the next 10 years to build and expand roads, highways and public transit infrastructure across Ontario. With this historic investment, the Ontario PCs are the only party with a transportation plan that includes roads, highways, bridges and transit, including Highway 413, the Bradford Bypass, Ontario Line, expanding GO train service and restoring Northlander passenger rail.

“Only the Ontario PCs have a plan to fight gridlock and reduce commute times by building roads, highways and transit infrastructure,” said Doug Ford. “For 15 years, the Del Duca-Wynne Liberals neglected Ontario’s infrastructure as it crumbled and gridlock grew. Andrea Horwath and the NDP are happier protesting highways and infrastructure than building it.”

With the province’s population expected to grow by approximately two million people over the next 10 years, Ontario needs to build new and expanded highways and public transit. Without more transportation infrastructure, Ministry of Transportation modelling shows that by 2051, travel times on the main stretch of Highway 401 will double with travel time taking 90 minutes longer on the 401 through the Greater Toronto and Hamilton Area (GTHA). This same modelling shows that all of the province’s 400-series highways in the GTHA, including Highway 407, will be at or exceed capacity within the next decade.

“Ontarians are sick of all the talk and endless studies that delay action and delay building,” added Ford. “Steven Del Duca and Andrea Horwath can’t help but say no and want you to choose between highways and subways. The only choice is between our party, which will build roads, highways and transit, and the Liberals and NDP who will say no to transportation infrastructure.”