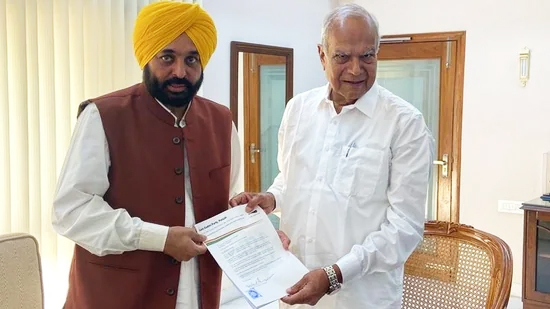 Bhagwant Mann, the chief minister-designate of Punjab met governor Banwarilal Purohit at the Raj Bhavan in Chandigarh on Saturday and staked claim to form the next government in the border state.

Later, Mann told reporters the governor asked him to inform about the place and time of the swearing-in ceremony. Mann said the event will be held at Khatkar Kalan at 12.30pm on March 16.

“I met the governor, handed over letter of support from our MLAs and staked claim to form the government. He told me to tell him wherever we want to hold swearing-in ceremony. It’ll be held at the native village of Bhagat Singh, Khatkar Kalan, at 12.30pm on March 16,” the CM -designate was quoted as saying by news agency ANI.

“People from houses across Punjab will come to the ceremony, they will also pay tribute to Bhagat Singh. We will have a good cabinet, historic decisions -that were never made before – will be made. So, you will have to wait,” he said.