Commonwealth Games 2022: All the action from the Opening Ceremony 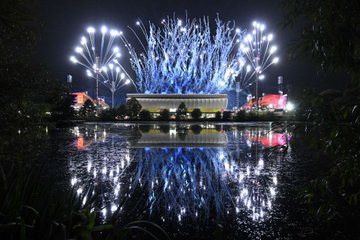 With an array of houses from around the Commonwealth, created using virtual reality, bringing back scenes of the bygone era to depict the most famous exports of the city and amid music, dance and a cultural milieu showcasing the life and times of the local people, the city of Birmingham welcomed 6,500 sportspersons from across 72 nations and territories for the 22nd edition of the Commonwealth Games at a gala opening ceremony here.

The two-hour programme during which the organisers put up a carnival-like display that boasted Birmingham’s impressive inventions, buttons, car horns, celluloid film and printing press, paid tributes to the working class at the Alexander Stadium through a raging bull, 10 metres high and built over five months, pulled in by female chain makers who would work long hours in hot and cramped outhouses to make small chains back in the 19th century.

Then to represent the victory of the working classes, the bull shed its armour to symbolise the famous strikes of 1910 when female chain makers went on strike for better conditions — and after 10 weeks they won, earning a new minimum wage that doubled their earnings. The collapsing bull represents the victory of the working classes over their employers.

The Royal guests, HRH Prince of Wales and the Duchess of Cornwall entered in the Prince’s own Aston Martin he bought in the 1970s while the Birmingham Royal Ballet presented amazing athleticism. The multi-cultural identity of the city was presented through an inspiring speech by child rights and education activist Malala Yousafzai, winner of the 2014 Nobel Peace Prize.

“As we watch incredible athletes of the Commonwealth Games, each child deserves the chance to reach their full potential and pursue their wildest dreams,” said Malala in her speech.

The magnificent Bards of Brum represent some of the city’s most famous exports: William Shakespeare, composer Edward Elgar, the inventor of the modern dictionary Samuel Johnson and the 18th-century Lunar Society, the forefathers of modern Birmingham.

Returning to the city where their four-decade career began, British music icon Duran Duran joined forces to create the finale to the ceremony’s stunning musical offer, featuring some of the city’s most celebrated artists and promoting its emerging talent on a global stage, from Black Sabbath’s Tony Iommi to vocalists Indigo Marshall and Gambini, under the musical direction of rapper, artist and educator Joshua ‘RTKal’ Holness.

And with this soundtrack captivating attention, the athletes paraded into the stadium, with Australia, the previous hosts of the Games back in 2018, who have brought their largest-ever team to the Games.

The teams entered the stadium representing their respective continents and with neighbouring countries giving them company instead of being paraded in alphabetical order.

They were followed by countries and territories from Africa and Asia.

The Prince of Wales received the Queen’s baton and read out the message by the Queen.